This is part 4 in a series about reducing heat loss in my Vanagon Westfalia.  In this installment, I show the affects of insulating the rear hatch. A spot that I have always felt is drafty and cold when sleeping.  Especially since I sleep with my head toward the rear hatch. If you haven’t read PARTS 1-3 in this series, then check them out here:

In this post, I test the Fanchers.com’s rear hatch thermal (yep, Fanchers again!).  First, here’s a picture of the poorly cut piece of Reflectix that I’ve been using:

One can easily see why that would be drafty.  It worked better than nothing, that’s for sure, but it was drafty.

Here is a picture of the Fancher’s product installed. It’s a perfect fit, and snaps into the same snaps as the rear hatch screen.  Installation is a “snap” (pun intended)!

Here’s a view from inside: 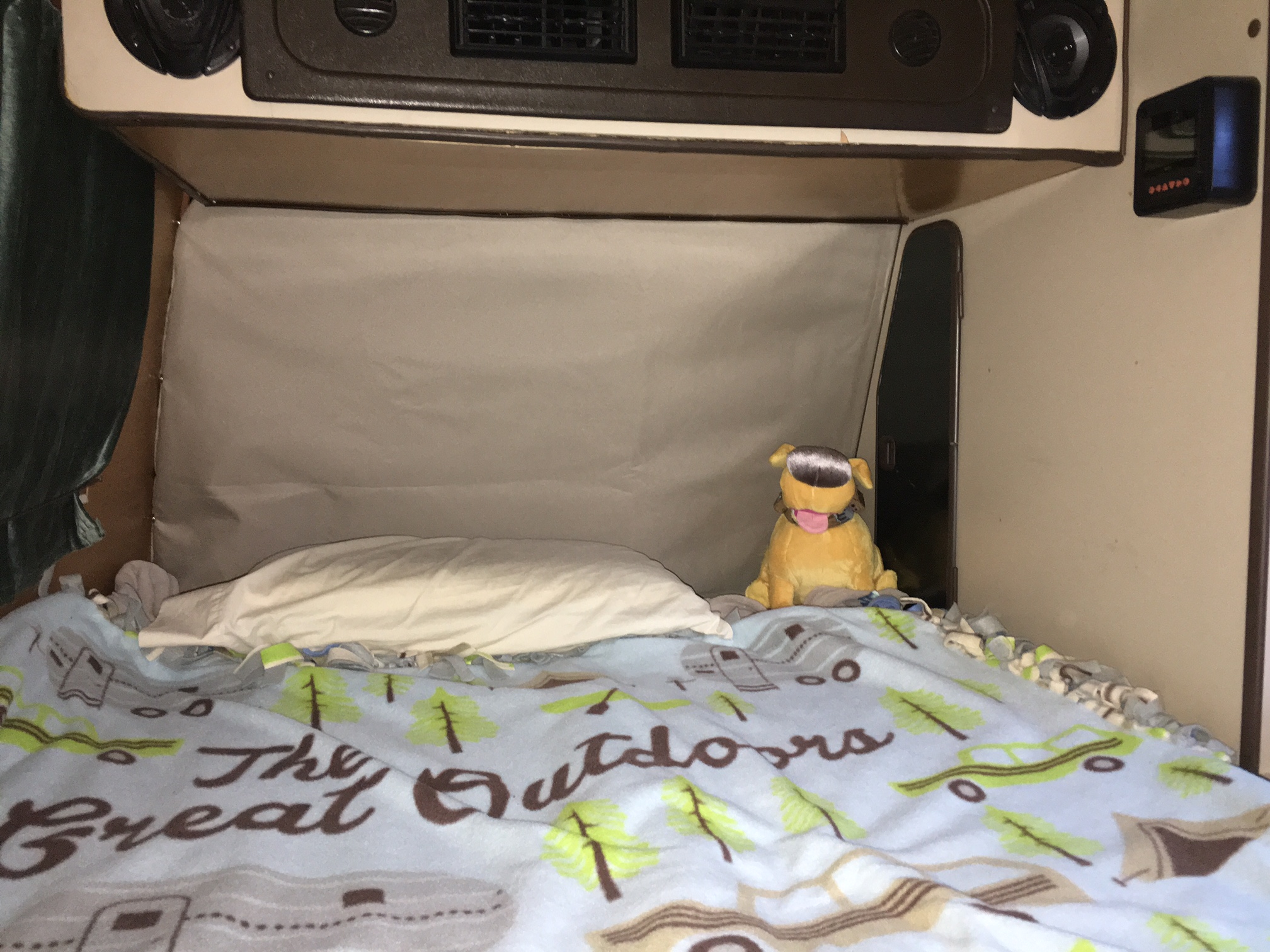 Like part 2 and 3 of this series, this test was done on the evening of December 31st, 2016.  Actually, between 2am and 3am on January 1st, 2017. 🙂  I won’t post my baseline temperature pictures again, as those can be seen in part 2 and 3.  I will state the temperature in the barn was about 29 degrees Fahrenheit, and the inside of the van was about 70 degrees Fahrenheit.

NOTE:  Thinking back, I had the barn door open for a while when these pictures were taken, and the back of the van is just a few feet from where the door is when closed.  I didn’t take a thermal temperature reading of outside, which I probably should have done. It was later in the evening too, so the temperature probably dropped a bit (probably closer to 20 degrees Fahrenheit outside by this time). Let’s get started!

First, some thermal images with no rear hatch insulation: 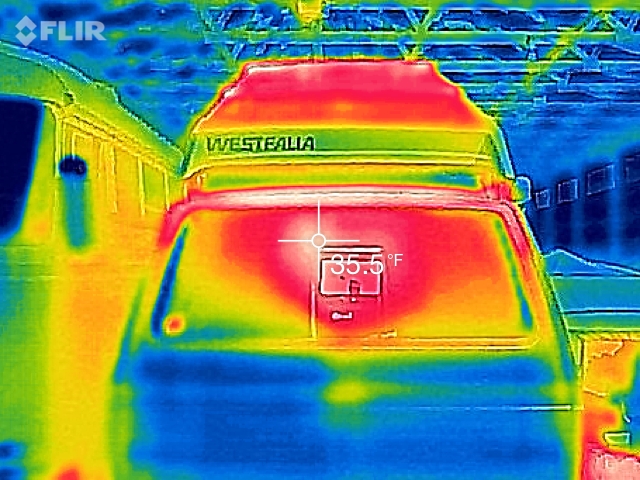 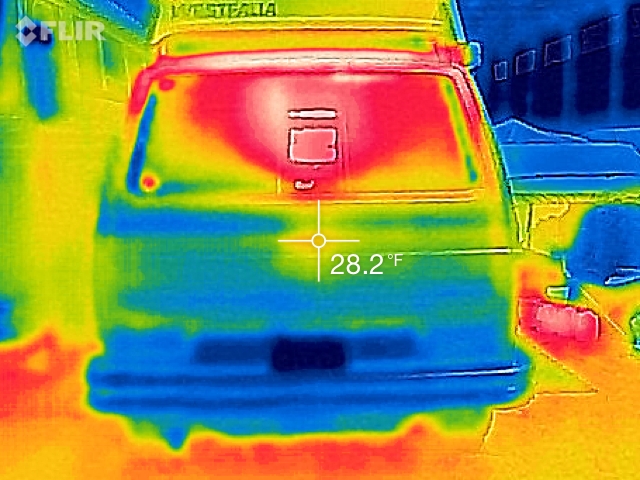 Next, the pictures with the Fancher’s rear hatch thermal installed (a definite improvement): 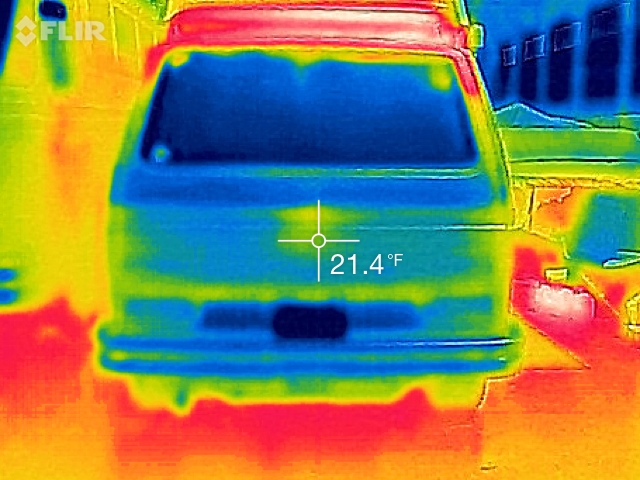 As you can see, the rear hatch thermal really improves the heat loss of the hear hatch.  Most importantly, from a practical daily use perspective, it doesn’t feel drafty along the back hatch anymore.  My van is feeling super cozy, and that makes me happy!

In part 5 of this series, I’ll be testing Campervanculture.com’s exterior reflectix tent thermal (Westfalia Roof Thermal Wrap). I think their product will kick ass too, just as much as these products from Fancher’s. Here’s a picture of the Campervanculture.com product: 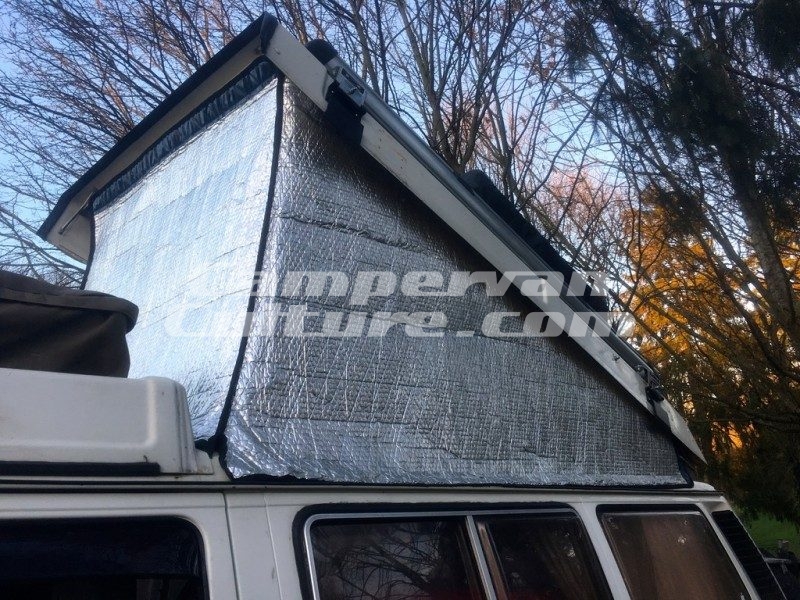